Two weeks have passed since the referendum on the UK Membership of the EU and the importance of the momentous decision is beginning to sink in. In the UK, on the European mainland, as well as elsewhere, the past and future are being intensively scrutinised, questioned and despite extreme differences in views, or perhaps because of them, it is clear that nothing will be quite the same in the medium-term future and onwards.
It is still too early to extract meaningful messages about the possible effect on a science field that is as cross-disciplinary and dependent on international collaboration as heritage science. One thing is certain: not much will change in the next two years. Both the UK Minister of State for Universities and Science, Jo Johnson, and Carlos Moedas, EU Commissioner for Research and Innovation, have assured the UK and the rest of the EU research community that everything continues as normal and that for the foreseeable future, UK will remain a full partner in EU research programmes. However, two years is a short period of time in one’s career, so let’s examine some possible future scenarios. 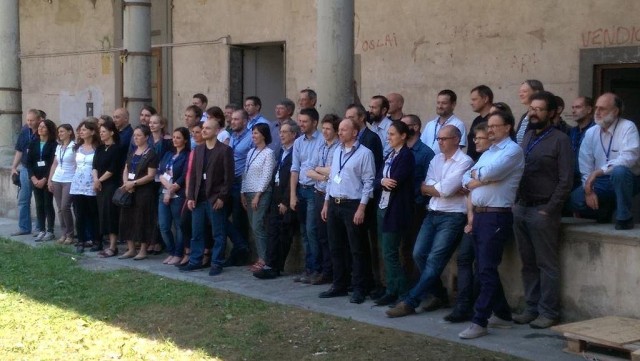 The large Nanorestart (Nanomaterial for the restoration of works of art, EU FP7) research consortium with UK researchers represented by UCL and Tate. There is significant value in bringing together large heritage science research consortia of academics, practitioners and businesses, yet there are no funding mechanisms available for such initiatives apart from EU Framework and Programmes. There are indications that post-Brexit, this should continue to be the case due to the strong UK heritage science research base.

At the  panel discussion on ‘EU Membership and UK Science’ during the 2nd International Conference on Science and Engineering in Arts, Heritage and Archaeology just a couple of days prior to the referendum, Dr Adam Cooper, Lecturer in Social Science and Public Policy at UCL, presented evidence that ~50% of heritage science funding in the UK comes from the EU. This makes our field very different from the average, where data show that 7%, and possibly more, of total public research funding in the UK is from EU sources. 50% is a truly substantial proportion for heritage science, and so is 7% for general science, because the biggest losses (90%) would be felt by research universities and SMEs. In relation to the latter, in addition to Innovate UK, EU Framework funding is the other major source of funding for research-intensive enterprises, and the loss could be felt in research-active conservation SMEs.

It is thus fair to assume that UK science will not allow the country to entirely dissociate itself from EU research programmes. In the period 2007-2013, UK paid €5.4Bn into EU research, development and innovation activities, and received €8.8Bn in return. So what are the options?

Of the future scenarios, associated status in EU research programmes has been mentioned most frequently, especially the Norway model, which enables researchers to have access not only to funding but also to frequently mentioned mobility programmes such as Erasmus+. This would be a good alternative to full membership, however, heritage science and UK science in general would lose the ability to influence how funding is prioritised and distributed (because research strategies are developed by the European Commission and confirmed by the European Parliament).

On the other hand, Norway has negotiated that part of its contribution to EU research is distributed through the so-called Norway grants scheme, which enables it to invest into research priorities of Norway’s own choosing, of which cultural heritage research is one of the key funding domains. The challenge for the UK heritage science domain would be to achieve the same.

The UK government has recently developed funding mechanisms to enable international collaboration beyond the EU, in so-called ODA countries. Of these, the Newton Fund is especially interesting, as it has prioritised research into cultural heritage. For the Newton Fund to have a broader impact in post-Brexit UK, two things would need to happen: it would need to significantly boost funding of research consortia and it would need to fund research overheads in full.

In addition, through the British Council, £30m is currently being invested in the Cultural Protection Fund to support heritage at risk. These two Funds might signal how international research funding will be managed in the future (not unlike the Norway Grants Scheme), therefore, heritage science needs to try even harder to demonstrate its socio-economic impact.

Not all is doom and gloom, funding-wise, not at all, and with more UK investment into research in countries beyond EU, UK heritage science could become the link between EU research programmes and the broader, more globally oriented research.

However, money is not everything.

During the recent debate in the House of Lords, Baroness Sharp of Guildford, the long-term doyenne of UK heritage science, raised the question about the potential impact of Brexit on UK heritage science with specific reference to free movement of people and Marie Curie programmes. The question of soft diplomacy and maintenance of the traditionally strong links between UK and other EU researchers was high on the agenda. Anecdotal evidence is emerging that UK researchers are being excluded from emerging research consortia and @Scientists4EU are collecting evidence.

We must withstand discriminatory pressure – in light of the statement by the EU Commissioner for Research and Innovation, there is no legal reason to exclude UK partners from EU bids, now or in the future. If anything, now is the time to demonstrate just how essential these collaborations are for EU science as well as for UK science.

The number of EU students on the MRes Heritage Science course, which I helped to establish and which recently morphed into the present-day MRes Science and Engineering in Arts, Heritage and Archaeology is appreciable: 50% of EU students enriched the mutual learning experience immensely in the last 5 years. Professor Michael Arthur, UCL Provost, has recently explored the potential impact of limited mobility (following a possible future fee status change) in a recent article in The Times. However, to ensure that UK universities are able to attract the best talent regardless of geography UK research councils have already developed the mechanism of relaxed eligibility requirements supporting EU mobility: we need to ensure that this mechanism is substantially reinforced in the future.

Migration and exchange of talent has always worked well for countries with a high Global Talent Index. Instead of a conclusion, the following statement by the Department of Business, Innovation and Skills is worth repeating: “international collaboration and researcher mobility [are] acknowledged as being core to the maintenance and further development of the UK’s world-leading position as a research nation, especially in light of the relatively limited inputs to the UK research base in terms of R&D expenditure and the number of researchers.”